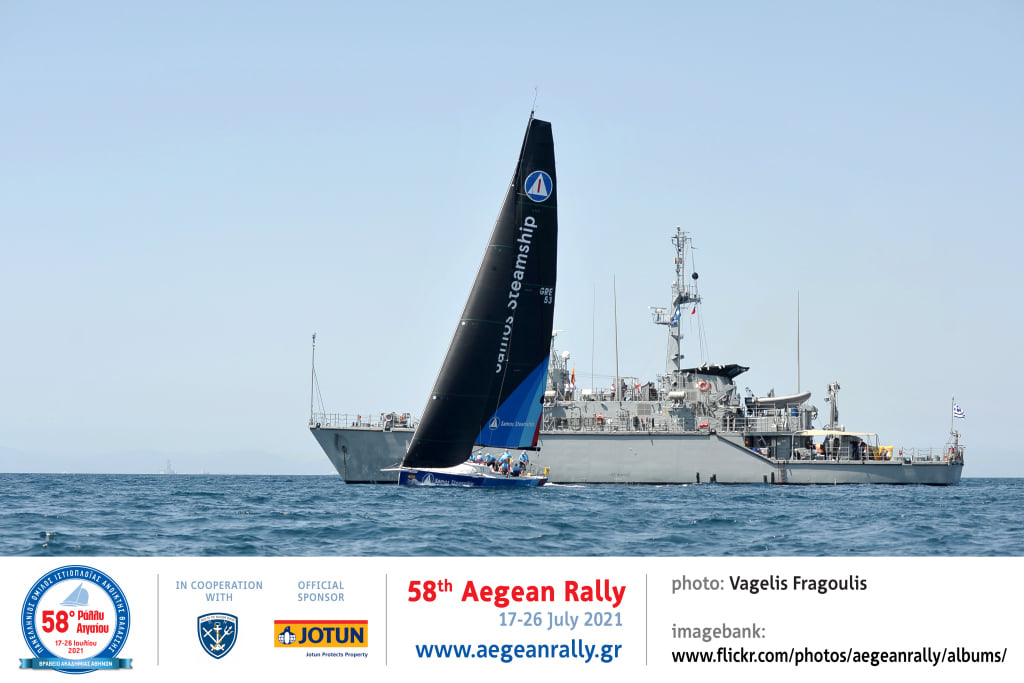 The first two races of the 58th edition of the Aegean Rally from Faliro Bay in Athens to Tinos via a scoring gate in the south tip of Kithnos island is done and dusted. Team OPTIMUM-Samos Steamship scored two bullets and is leading with 2019 winning Team PEGA hot in her heels. Very light wind conditions prevailed throughout the course that demanded full concentration to figure out how to escape from zero wind patches and try to stay in face with scattered wind lanes.

“It is my 6th consecutive Aegean Rally with Team OPTIMUM and the 2nd as co-skipper to Vaggelis Nikolopoulos and Samos Steamship as our full on sponsor and supporter. I feel the team is as strong as never before since I joined. New recruits blended-in fast enough due to the training for and during our successful participation in the AEGEAN 600. Actually, our 24-hour training session prior to AEGEAN 600 resembled perfectly the super light conditions we encountered to reach Tinos. We stayed focused and changed shifts every two hours from 20:00 until 08:00. Even when we parked for four hours at deserted islet Piperi, all crew showed great patience and persistence keeping at the same time positive spirit on board. We used the windseeker sail more than we have used it the last 6 years altogether. I am happy with how the team managed the frustrating conditions and I admit that the big margins on the corrected times show that luck was more on our side than our competition. Thumbs up for those ones that fought hard to reach Tinos, up to twelve hours more than it took us”, confess our 26 year old co-skipper Charis Mavrogeorgis.

Today, we regroup in Tinos and go over our checklists and studying the complex weather pattern as the “meltemi” will not establish in the Aegean Sea before Wednesday. Our start for the race/leg from Tinos to Psara is tomorrow Tuesday 20/7 and light southerly tricky winds are forecasted.

Please stay tuned to follow Team OPTIMUM-SAMOS Steamship heading north to reach at heroic Psara island that played a huge role in the Greek Revolution in 1821. There, important celebrations will take place for the 200-year anniversary.