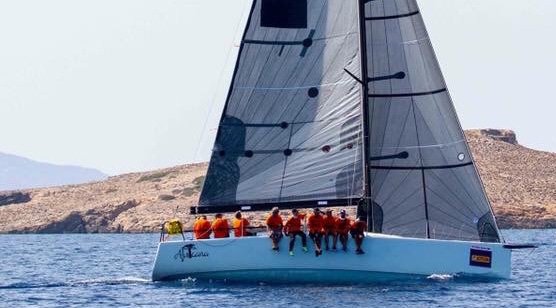 In the Mix for the Aegean Rally Trophy..

Greek wind God Eolos must be mad with something and we had the 3rd consecutive leg of the 55th Aegean Rally without “meltemi” the usual 25-30 knot northern direction wind that is always present during July and August in the Aegean Sea. As such, the competing fleet had to spend another 24 hours on average to sail from Lipsi to Paros in very light winds. Patience, persistence and implementing crew shifts with precision were the key ingredients for AFRICANA-Team OPTIMUM to score a 3rd place in Leg 3 and by doing so to become Overall Leader in a three-way tie along with BULLET(TP52) and CHIARA IASON(GS40) with one more Leg to go.

“It was slow motion all the way from Lipsi to Paros. The wind never exceeded 8 knots and we recorded full stop sessions in many instances. The moon was one day sort from full and there was no need for flashlights on deck all night long. Also, we had a “Hollywood” night since an electric storm was “playing” far away on the west for hours on. For the first time in twenty-four Aegean Rally participations with Team OPTIMUM it is the first time we had no “meltemi” and had rain as it happened today in Paros. What seems will never change in the AEGEAN Rally is that the winner will be known only after all competitors cross the finishing line of the last Leg”, states Nikos Lazos, AFRICANA-Team OPTIMUM and a veteran with twenty-nine Aegean Rally editions under his belt.

Therefore, all will go down to the wire in the finishing line in Cape Sounio, under the Temple of Poseidon. Dare to be there!