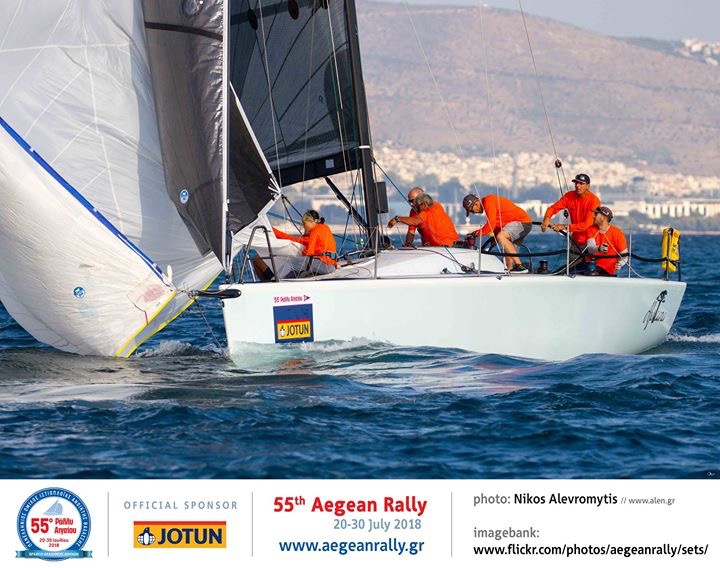 An amazing split developed on the competing fleet of the 55th Aegean Rally in the final Leg 4 from Parikia, Paros to Cape Sounio, Athens. The thousands of fans following the race through the race tracker from their electronic devises were in agony on which side will pay out, the left or the right? It turned out that AFRICANA-Team OPTIMUM committing to the left(SW) and followed by CHIARA IASON and IONIA won the three top spots in Leg 4. BULLET Team chose the right(NW), was followed by the rest of the fleet and had to settle for fourth.

“Studying the weather predictions we got the clear view that Leg 4 was going to be another upwind light air affair, and any wind filling down would come from the W, SW. So, from the start we committed to be the most windward (SW) boat of the fleet and were surprised to watch only CHIARA IASON and IONIA choosing too our strategy. Ok, the starboard tack was painfully slow at times but the gain was clear. There were boats like BULLET that apart their starboard tack start, they tacked to port all the way NW up to Siros island developing a split from us and the rhumb line of more than 10 miles. But that’s offshore sailing and hats off to CHIARA IASON and IONIA for sticking to our stern, sailing smart and never allowing us to extend enough and win them on handicap. CHIARA won the Leg 4 battle, broke the 3-way tie with us and BULLET and won the 55th Aegean Rally Trophy. IONIA managed a 2nd on Leg 4 showing a promising future and we got the 3rd spot that won us the 2nd podium position for the Aegean Rally, ahead of BULLET in 3rd place”, says trimmer Lambros Nakis who joined AFRICANA-Team OPTIMUM for leg 4 to replace pitman Tassos Dikastopoulos who had other commitments to attend.

Meet you all tomorrow (Monday) at 21:00 at the prize giving ceremony to cheer for CHIARA IASON for their well deserved victory.