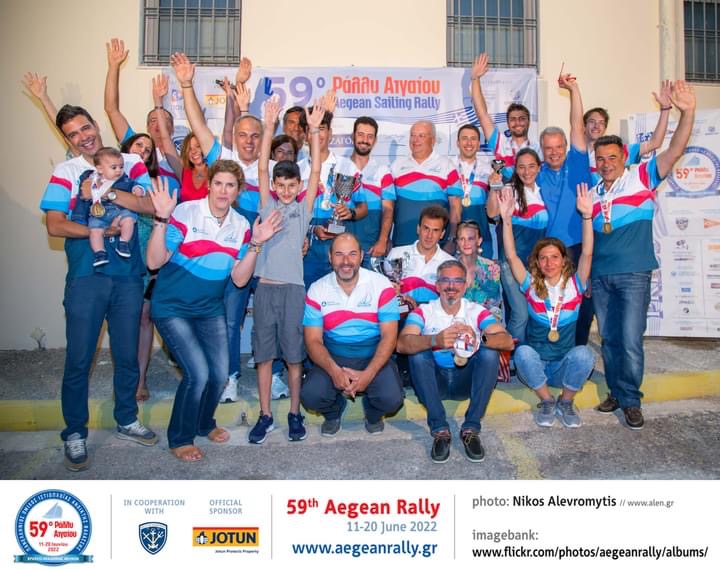 Outright victory in the last race of the 59th Aegean Rally from Volissos, Chios to Cape Sounio propelled Team OPTIMUM-Samos Steamaship on the podium. With a scorecard of 4,4,3,1, Team OPTIMUM concluded its participation in the 59th Aegean Rally in 3rd place. Following back to back Aegean Rally victories in 2020 and 2021 we extend the unparalleled record of Team OPTIMUM’s  28 Aegean Rally participations with 23 podium finishes, 11 times first, 7 times  second and 5 times third.  More importantly, our participation allowed us to race valuable miles offshore in various conditions on board our newly acquired weapon of choice OPTIMUM S. Although the entry list was short the fight for all podium positions settled only after the last race with 2019 winner PEGA in 1st place skippered by exceptional Theodore Tsoulfas, and Rio Olympic bronze medalist duo of Mantis-Kagialis and their top team in 2nd place on equal points in their second Aegean Rally with their magnificently prepared VELOS .

“The more miles we clock the more we learn to keep the pedal to the metal as we should on a thoroughbred racing machine like OPTIMUM S. We improved race by race and we managed to excel in the 105 miles of race 4 in 20-25 knots of meltemi winds. We changed as much crew members as possible along the 4 races in order to give the chance to as many Team OPTIMUM members to feel the boat in the open sea ahead of the AEGEAN 600 Yacht Race which is the main focus in our racing program in Greece. For a team consisting of amateur sailing enthusiasts leaving work, family and other commitments to compete in a weeklong event, as the Aegean Rally is not an easy call. But time and time again it is proven that it does miracles in bonding the crew and raising Team OPTIMUM spirit. In addition, it allows time to sort and improve myriad details in the boat systems during the stopovers. And upon our return at home base, we feel stronger, more capable and confident for the rest of the season. This year, with our new OPTIMUM S, all this sense is fully exaggerated”, says Team OPTIMUM crew boss/pitman Nikos Apostolakis.

A huge amount of volunteer work has been clocked since the arrival of OPTIMUM S from Australia but without the total commitment and support from Samos Steamship of the Inglessis family we would have never cover the ground we did. The OPTIMUM S journey is on the very beginning and the enthusiastic OPTIMUM “family” photo is our driving force!