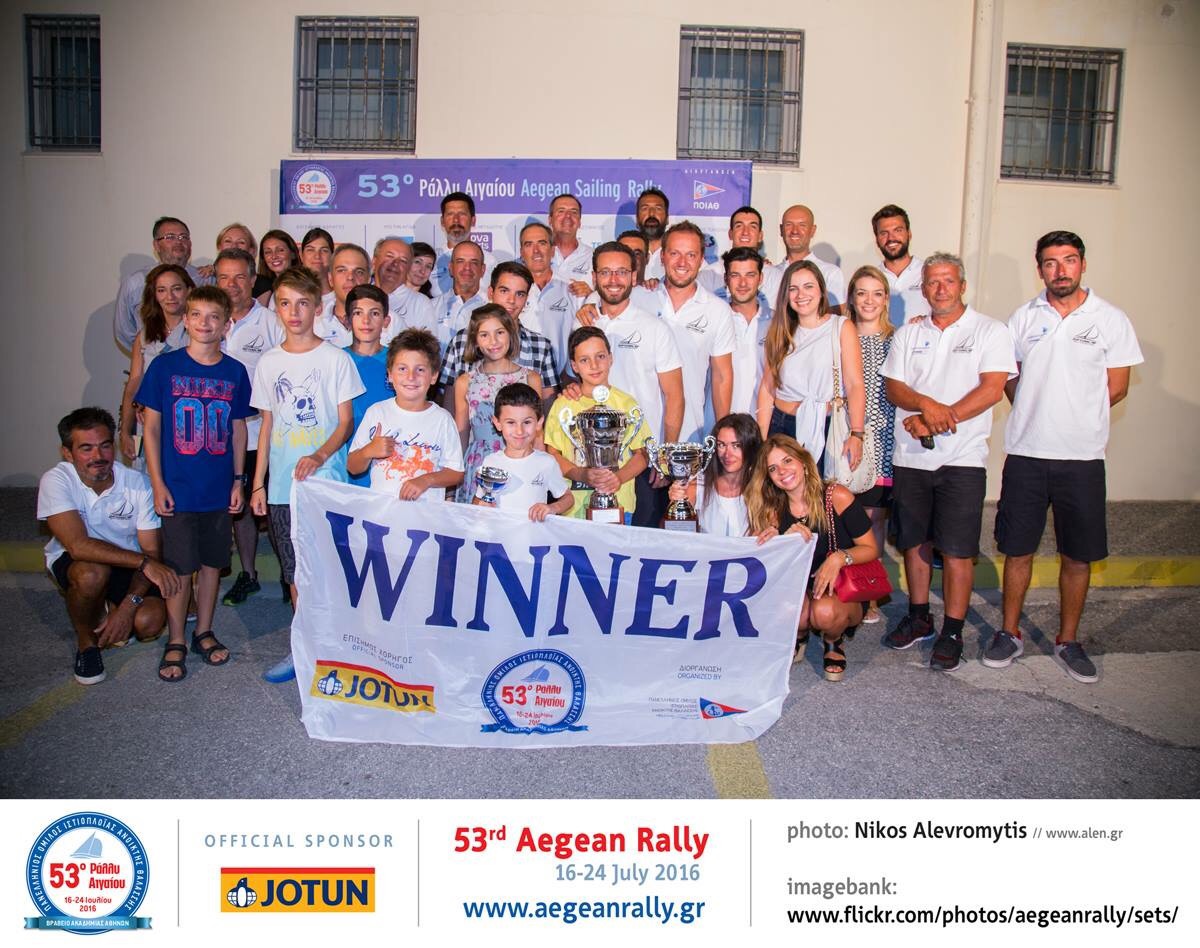 The 53rd Aegean Rally, Greece’s top offshore sailing event just entered the history books. OPTIMUM 3- THENAMARIS-OPTIMISE was the worthy winner after 6 demanding offshore races with a score line of 3-3-1-1-1-1 after covering a total of 360 nautical miles. Team OPTIMUM sponsored and supported by THENAMARIS and OPTIMISE added another hard won victory and is leading the list of the most successful team over the 53-year history of the Aegean Rally. In the 22 editions the team has participated since its establishment in 1994, OPTIMUMM(36-footer) and OPTIMUM 3(52-footer) has achieved podium positions 18 times, including 8 times 1st, 6 times 2nd and 4 times 3rd. The Aegean Rally is unique among established offshore events around the world in the sense that every year follows a different route around the Aegean Sea and that makes it even harder for repeated success unless you have the Optimum recipe which is no other than being a real Team offshore and ashore.

“I am an Optimum Team member 10 years now and I call it a 10-year trip of experiences! In 2015, I elected to sit out for personal reasons, and upon my return this season I realized why this team is so successful for so long. Team leaders/owners Periklis Livas and Nikos Lazos will always take decisions on time that are best for the team’s future rather than themselves and at any cost. The Aegean Rally is a test of team unity & spirit due to its time length offshore and ashore (9-10 days) away from base and through major hardships. It also gives the opportunity to newcomers to really live the Optimum spirit and see what is like from within. This year was no different and the Optimum team spirit reached new heights during the Rally, fueled with the enthusiasm, passion and hard work of the “youngsters” that found firm ground laid by the “matures”. OPTIMUM 3-THENAMARIS-OPTIMISE was the only yacht team that managed to successfully compete back to back in the two major events of this season, (i.e. the European Championship and the Aegean Rally) and that make us all proud for the depth of loyal Optimum team members willing to put the time and effort needed. We all got so emotional when we realized that ex-Optimum bowman Costis Afentakis was the windsurfer crossing alongside us the finishing line in Milos Island to cheer and welcome us after a really tough leg from Patmos. I also realized why this Optimum spirit exists and drives the team forward. Periklis and Nick have a well known set of values within the team. People that feel the team should adapt to their personalities do not last. People that streamline with the Optimum values become key team players, leave their mark and positively influence the team’s progression over the years. Last but not least we feel that the whole season and especially during the Aegean Rally we played as a team an inspirational role to a couple of young sailors we had on board that have high ambitions for their future in racing sailing. Charis Mavrogeorgis has the next Olympics in Tokyo on his sights in the Laser Class and Gary Gabri is seriously motivated to compete in the next Volvo Ocean Race. They are talented, very hard working and serious and we will use our Optimum resources and connections to propel them forward to reach their goals. Thank you mates for bearing with me…” says Optimum pitman/mastman and Media man George Eliopoulos that passionately performs on his sailing duty and at the same time catch on camera the Optimum spirit and air it to the world when the rest of us scream at him to get out of the way…

The 53rd Aegean Rally proved a tough challenge and sponsors THENAMARIS and OPTIMISE along with team members, families and fans had to wait until race 6 and the finish in Cape Sounio to celebrate for gold. The lineup for this come-from-behind win shows that the usual 15 were not enough and with replacements we reached 21 that you may all call heroes. Gary Gabri, Stratis Tsabarlis, George Eliopoulos, Nikos Apostolakis, Thanos Papasideris, Kostas Makridis, George Kyragiannis, Tasos Dikastopoulos, Manos Roudas, Charis Mavrogeorgis and Periklis Livas did race the whole lot. Gerry Petratos, George Chatzigeorgiou, Lambros Nakis, Michalis Kouvaris Manolis Markogiannakis and Nick Lazos did join for specific races and Elias Kamaratos, Andreas Papadopoulos and Konstantinos Konstantinidis proved valuable in the tough 24-mile coastal race in Patmos Island.
Thank all you so much!