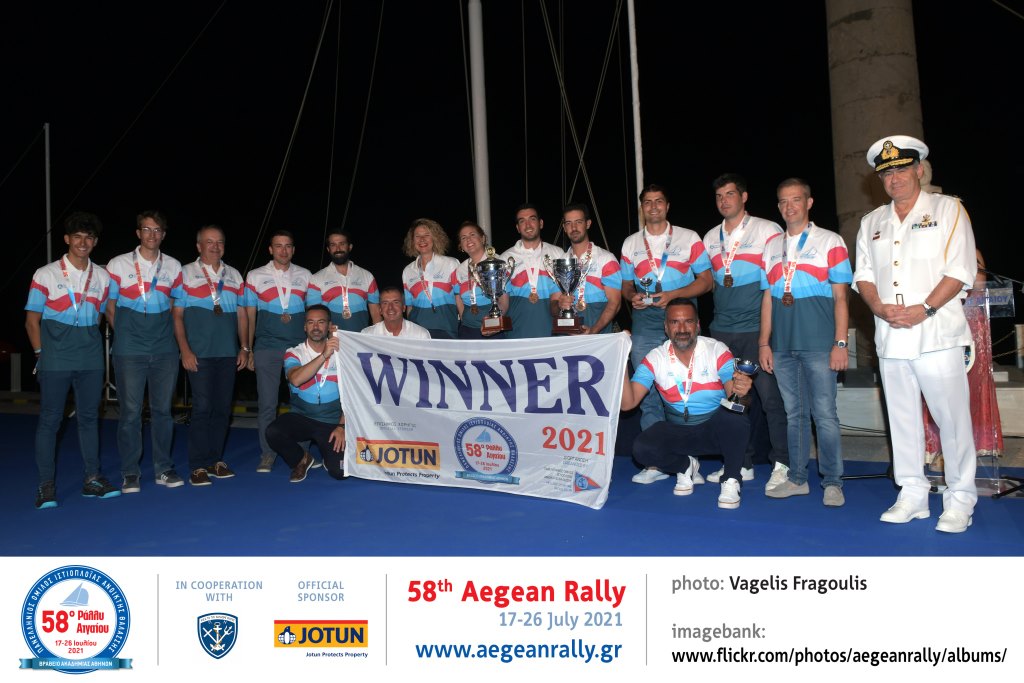 Race 5 of the 58th Aegean Rally offered to competing sailors dream-on conditions for the years to come: T-shirt sailing conditions in 30-35 knots of wind at 130-145 TWA for the whole 95 miles distance from Psara island to Cape Sounio finish line.  Team OPTIMUM-Samos Steamship crew behaved like kids opening the new toy box and immersed in an exhilarating downhill ride, surfing waves of up to 4 meters high, for about six hours and attaining speeds up to 24,7 knots!  The three helmsmen onboard started a competition on how many waves they will catch on one surf and  the result was 1st place in race 5 and a repeat of 2013 result of 5-0.  Our back to back Aegean Rally victories in 2020 and 2021 extend the unparalleled record of Team OPTIMUM’s  27 Aegean Rally participations with 22 podium finishes, 11 times first, 7 times  second and 4 times third.

“As soon as Hellenic Offshore Racing Club announced the course for the 58th Aegean Rally many months ago, we realised that the 2021 season offered at least two times to race-surf endlessly downhill in the meltemi winds of the Aegean Sea.  We missed the first time as the meltemi didn’t show up in the right time from Santorini to Kasos-Karpathos turning point but did show up at its best on the final leg of the Aegean Rally from Psara Island to Cape Sounio.  OPTIMUM 3, our trustworthy Farr 52 OD and hardened crew from the Aegean 600 two weeks earlier, were more than prepared to hit the pedal to the metal and enjoy the ride grinding and screaming out almost every wave along the way.  It was a dream hands-on sailors party, really”, declares OPTIMUM Team leader Periklis Livas.
“I joined Team OPTIMUM for the 2018 Rolex Middle Sea Race successful campaign and promoted as co-skipper since 2020.  I kept hearing talks among the team members about sustained stable high surfing speeds in various occasions in the past and I was “hungry” to steer and live on the ride described.  We had extensively discussed the two certain opportunities in the 2021 race program in various briefings but what I actually experienced was way beyond my expectation.  OPTIMUM 3 and our great team members offered me a sensational ride that it will take time to fully appreciate.  Our trimmers and grinders allowed me to steer down continuously batches of multiple waves at sustained speeds of over 20 knots.  I got addicted and I could steer for the whole six daylight hours “hell” ride but I presented my team-player qualities and I allowed co-skipper Charis Mavrogeorgis and Periklis to share the fun”, admits Vaggelis Nikolopoulos with a huge smile in his face.

It is not easy even for established teams like Team OPTIMUM race to win back to back two demanding weekly regattas in a three week period, Aegean 600 and Aegean Rally.  However, we managed rather successfully as the results show, and there are two main factors for this, both attributed to our 2-year partnership with Samos Steamship.  First, it is that Samos Steamship of the Inglessis family provided in a timely and involved manner the means to have OPTIMUM 3 fully updated and maintained for combat. Secondly and equally important they fully supported from day one Team Optimum vision-decision to attract in Team OPTIMUM new young talent and that way expand and build-on for the future rather than stay still on our laurels.

The 58th edition of the Aegean Rally combined with the inaugural Aegean 600 have prompted a great season for Team OPTIMUM-Samos Steamship and caused a nice peak in our Team OPTIMUM spirit that we all enjoyed immensely.  You may check what we mean by going over our photos and videos in fb, instagram and youtube Team OPTIMUM channels,  Job done and in we had fun too…