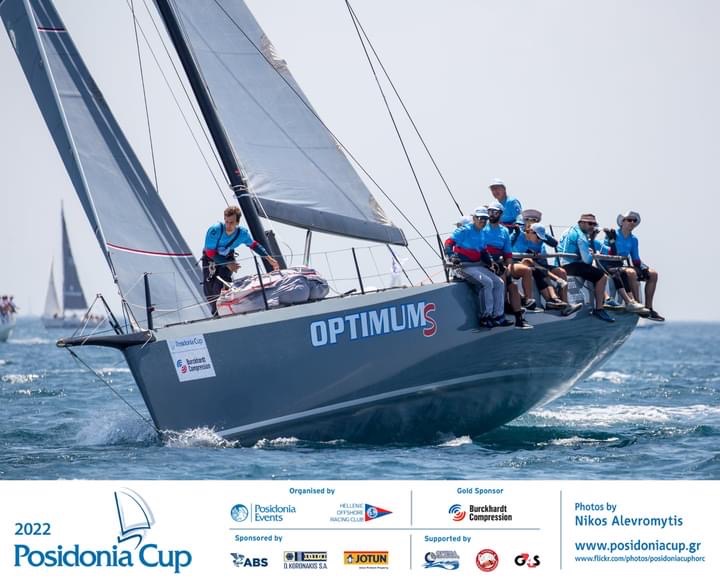 Few days left before the Sunday 14:00hrs start of the Aegean 600, Team OPTIMUM-Samos Steamship is finalizing all details to compete with OPTIMUM S in the top offshore event of Eastern Mediterranean in Greece’s Aegean Sea.  It will be the first 600-mile non-stop race with OPTIMUM S /Carkeek 47 Grand Prix for Team OPTIMUM following seven Rolex Middle Sea Race and one Aegean 600 successful participations with OPTIMUM 3 /Farr 52.  The Team gained valuable experience racing hard OPTIMUM S in the 59th Aegean Rally in the Aegean Sea a few weeks ago and is prepared to push hard their new weapon that has three Sydney-Hobart races as INDIAN.  In the inaugural Aegean 600 last year, Team OPTIMUM-Samos Steamship finished 2nd overall (IRC) and 1st in the ORCi division.

“It is a non-stop hurdle since the arrival of OPTIMUM S from Australia and all our amateur Team members have placed serious time and effort to get where we are today in terms of readiness to compete with a thoroughbred carbon racing yacht in a 600-mile race with 26 corners!  The more miles we race her the more we learn to press the pedal to the metal safely.  The sail wardrobe is much different from what we knew so far and we hopefully learn fast to change gears.  The fantastic course is exactly the same as last year, as is the case with all 600-mile classics but the list of 40 participants reveals a much more competitive fleet from 14 countries as far as Australia and size wise from a Maltese Swan 112 to a Greek Mini 6,50.  Trimarans and catamarans add to the spice, and all looks promising for Aegean 600 to grow year after year” says Team co-Principal and tactician Nick Lazos.

In addition Team OPTIMUM members Evi Dellidou and Gerasimos Petratos will enter OPTIMUM Sailing Academy’s (O.S.A.) Dehler 30od AETHER in the Double Handed division of the Aegean 600 for second year in a row.  Last year they finished in a hard earned 2nd place and this year the double handers compete for the overall prizes too.  The duo is the only Greek mixed DH crew that has ever competed in a 600-mile race and Team OPTIMUM is really proud of their huge effort and commitment.  LALIZAS and EVIOL support their challenge.

On a multi day non-stop race the pattern of drive-trim-eat-sleep-repeat is bearable and productive only if everyone on board see it as a challenge to try to give their best self in an extra long tough team effort.  That’s where OPTIMUM spirit and passion comes to play on board among the thirteen crew members living on a tight space, with a demanding multirole shift schedule, on a single three layer clothing allowance, eating mostly dehydrated food and protein bars for 3-6 days. Our patron Samos Steamship takes note of the huge Team OPTIMUM effort and supports us in every possible way.  Quantum Sails Greece, D. Koronakis S.A./Kapa Ropes Technology, Rope Align and Lalizas S.A. have provided their support and expertise in sails, ropes and safety issues.

Unfortunately Team Optimum co-skipper Vaggelis Nikolopoulos has tested Covid positive and will not make the Sunday start and co-skipper Charis Mavrogeorgis will serve the navigator/afterguard role due to not much racing time available this season due to other commitments.  Team co-principals Periklis Livas and Nick Lazos will take on the co-skipper role too.