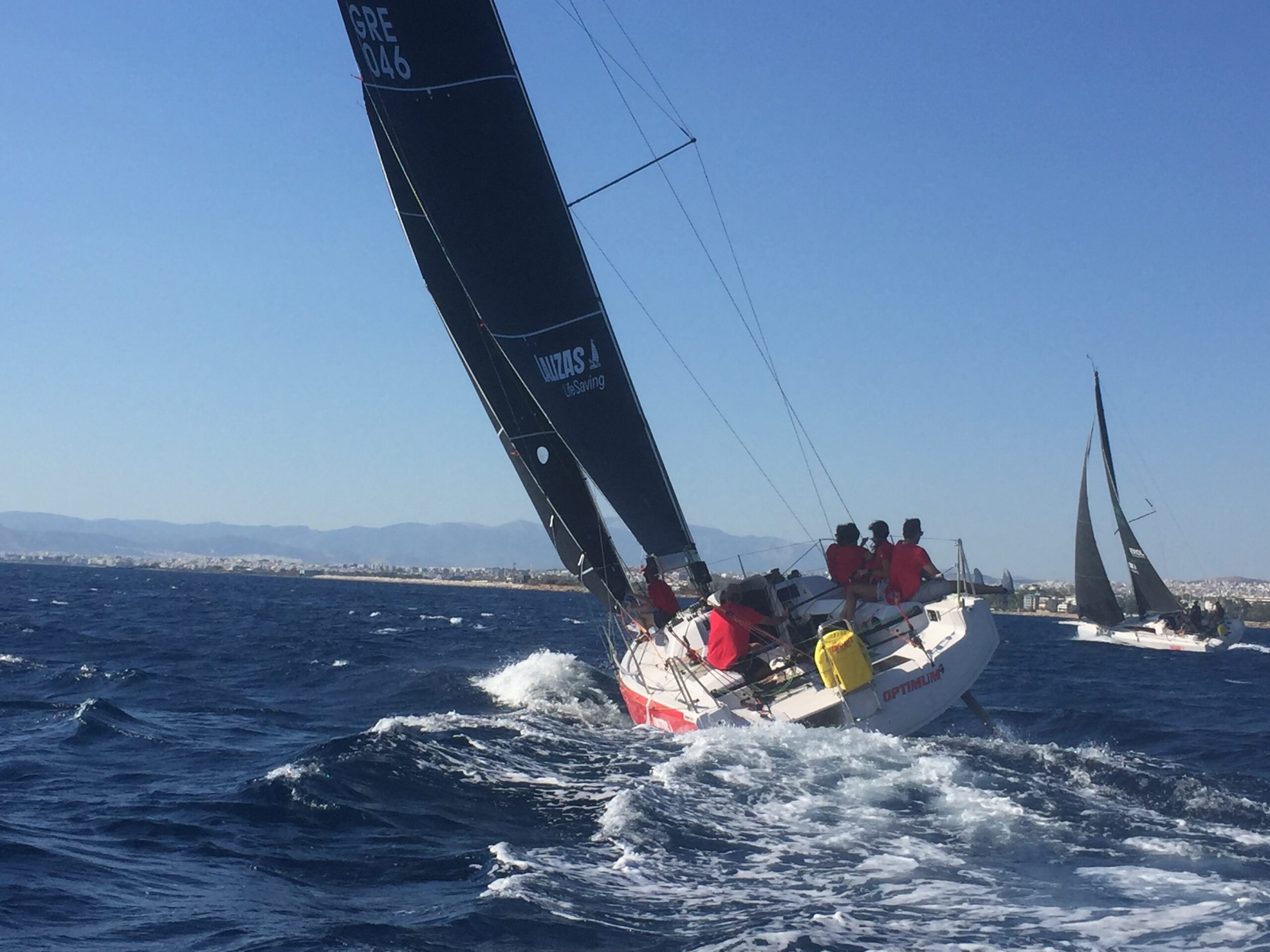 Saint George Race is always the first of four races organised by Yacht Club Greece that make up the Winter Series every year in November.  Due to the windy forecast due to Eva storm, the Race Committee wisely moved the start two hours earlier, at 10:00 on Saturday, and selected a shorter coastal course of 43 miles to make sure that all competing yachts would cross the finish line and get back to their home port before dark that the worst of the weather was expected.  The forecast was right on and the conditions in the second and third leg of the race were lively with the southerly front giving breezes of 20-25 knots, gusting 28 and significant onshore waves.  O.S.A. Dehler 30ods OPTIMUM 4 and AETHER competed in full crew mode with six members on each yacht enjoying the brisk conditions that delivered an unforgettable full on adrenaline sailing experience.  The cherry on the cake was that the two OPTIMUM Sailing Academy managed to win first and second place respectively, after handling best the tough conditions and especially the final superfast downwind third leg, clocking speeds in the high teens.  Both boats had crew members on board with no or very little sailing experience that jumped on the opportunity offered by O.S.A. and O.S.A.’s sponsor LALIZAS to safely seduce and immerse as many as possible interested sailing enthusiasts to the sport of sailing.

“Last week I read the Team OPTIMUM post about Hydra race that included an open invitation to join and share the OPTIMUM spirit.  Offshore Sailing has been a hobby sport for me for the last few years having graduated from a sailing school and racing occasionally on ORC sport category boats.  I have seen Team OPTIMUM in action few times and follow them in social media and I grabbed the opportunity and replied to their open invitation.  They asked me my phone number and next day I got a friendly call after a short chat, I was offered to join the crew on OPTIMUM 4 for Saint George Race on Saturday which I enthusiastically accepted.  As such, I showed up late on the dock due to a failure of my alarm clock but the guys where friendly and made me feel comfortable at once.   It is obvious that the team is passionate for what they do, and they push hard even for short local races while trying to exploit fully the capabilities of their yacht. The skippers’ tactics in navigating through the race area and fine-tuning the sails for the next moves is profound, while each sailor on board was given the room to perform best on his position. Repeatedly reaching 16 knots on a 30ft yacht while sailing downwind with winds over 25 knots has been an experience for me – a challenging one.  Overall, it was serious fun and a special learning opportunity and I hope they call me again to join them, although I brought bananas as my snack, which are not allowed onboard in Team OPTIMUM”, says Andonis Thomopoulos, who worked hard on his first OPTIMUM outing and picked nickname T(h)om for future OPTIMUM rides.

For the record OPTIMUM 4 was crewed by Team OPTIMUM member 18-year-old Vasilis Livas who skipped his Formula Kite training for the day to take the wet bowman role, Team OPTIMUM veterans Makridis, Markogiannakis, Lazos, Livas and O.S.A. invitee Andonis Thomopoulos, who God knows if he ever shows up again after bullying him for bringing secretly bananas onboard. It was a memorable event for all involved.