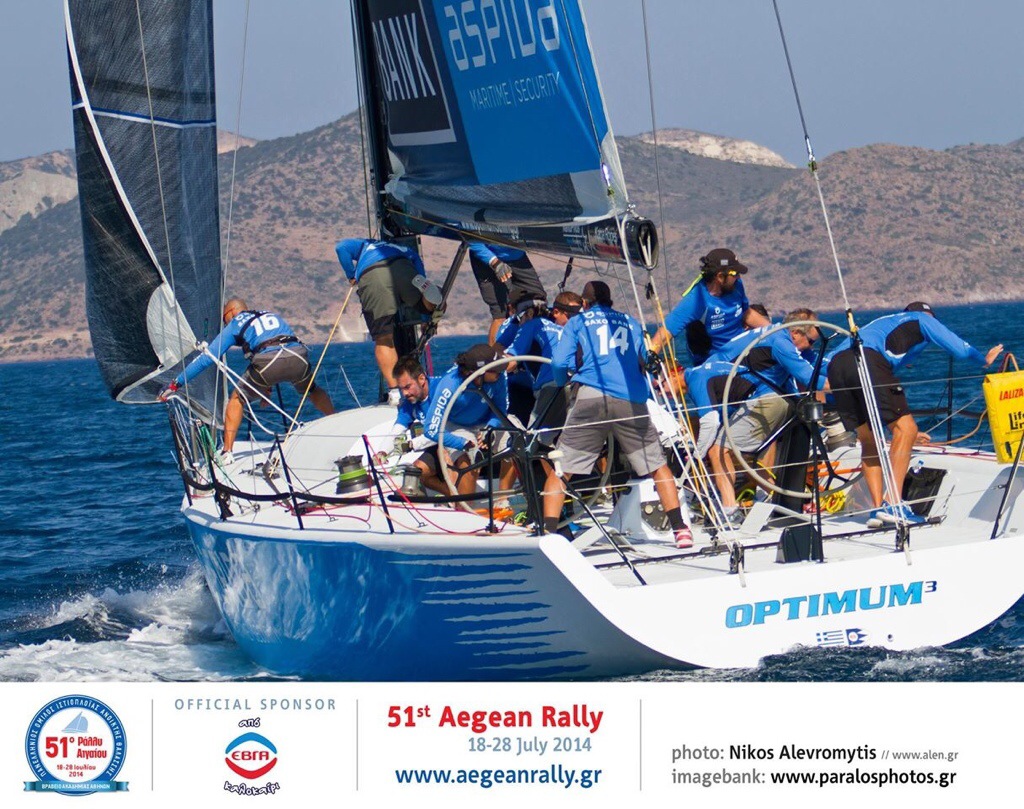 OPTIMUM 3-ASPIDA-SAXOBANK scored an ace on the second race of the 51st Aegean Rally from Milos to Astipalea Island and by doing so became the overall leader of the tough regatta so far. The second leg tested the stamina of the Optimum crew that worked restlessly for 11 hours fighting a sea and wind state of up to force 8. This leg was the longest in this 51st edition of the rally, measuring a distance from Milos to Astipalea of 110 nautical miles and offered the opportunity for a fast reaching ride to the 15-strong Optimum crew and the chance for a few downhill bursts from the top of some gorgeous Aegean Sea waves that allowed OPTIMUM 3 to reach instant boat speeds of up to 19 knots. As such, the OPTIMUM Team, sponsored by leaders in their respective fields worldwide ASPIDA Maritime Security and SAXOBANK, is the overall leader on the scoreboard by posting a 2nd and a 1st so far.

“Well, the forecast for Leg 2 was predicting NNW winds up to force 5 and we were set for happy sailing. The reality we faced in the racetrack were right on in terms of the direction of the wind but the strength reached up to 37 knots (force 8)! That turned our happy sailing outing on a long grinding and hiking test for the crew and some tough driving for the two skippers. We also managed to blow up our A2 spinnaker as we were chasing hard our main competitor “Bullet” and that may have an effect in our performance depending on the conditions we face in the following legs of the race. We crossed the finishing line in beautiful Astipalea island second and seriously exhausted but on a “high” knowing that our hard push and smart tactics were good enough to hand us the 1st place on handicap for the leg and the lead overall”, admits navigator Manos Roudas following the short televised Leg winner & Overall Leader flag awarding ceremony by the Mayor of Astipalea.

Team Optimum is having a rest until 18:30 today, which will be followed by a run through checklists and full on preparations as late as it might take to avoid working under the sun to prepare for Wednesdays’ coastal race, Race 3 of the 51st Aegean Rally. The Optimum Team obviously looks strong and seems hungry enough to score another podium result tomorrow.

So, stay with us for your Optimum fun…