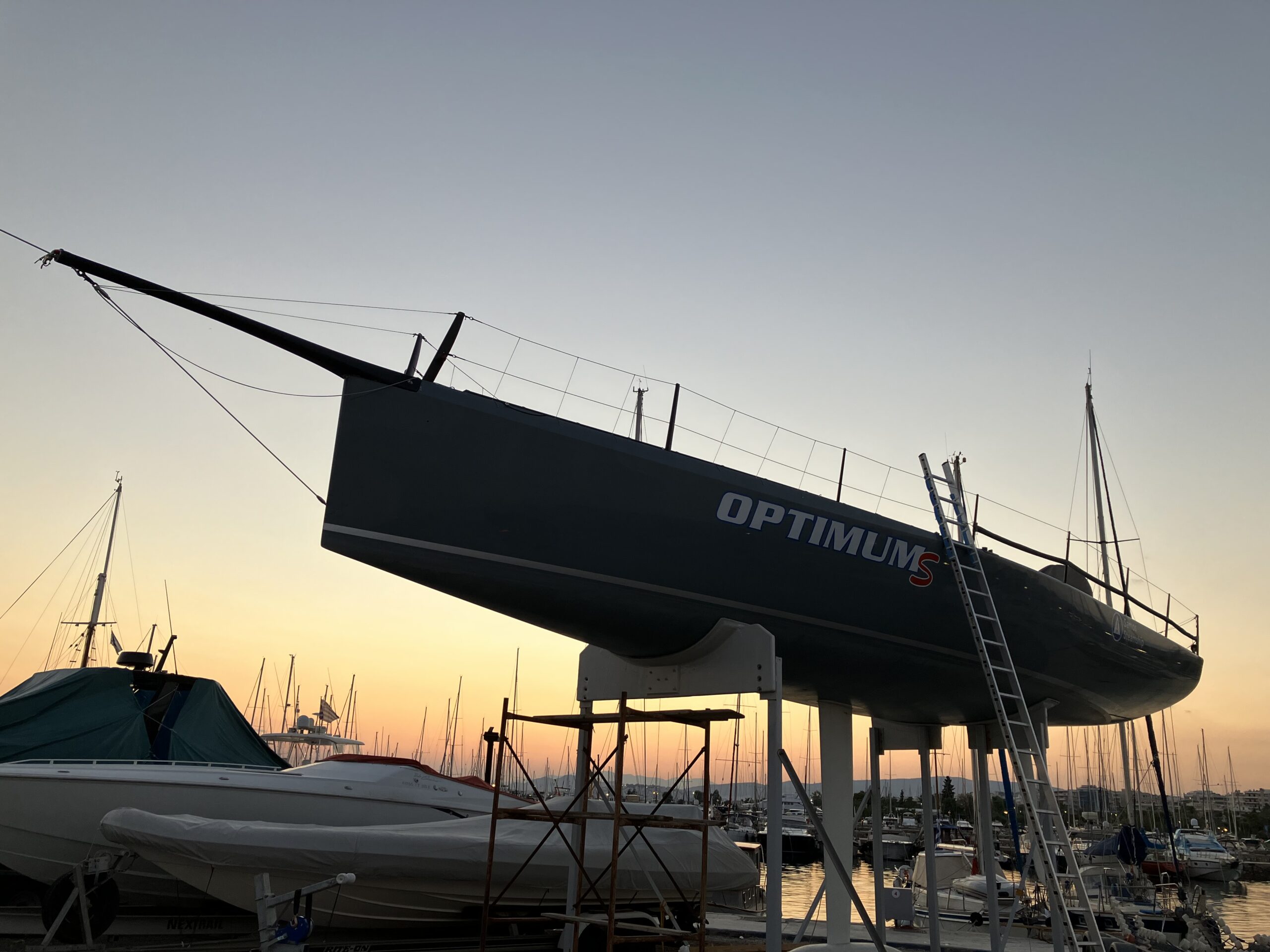 Team OPTIMUM-Samos Steamship retired from the Aegean 600 Yacht Race soon after the start due to a complete electronics blackout.  The Team left Olympic Marine and on its way to Cape Sounio for the start discovered that OPTIMUM S electronics system refused to turn on.  For 90 minutes, three knowledgeable team members tried every possible way to identify and solve the issue but with no luck.  The unanimous decision was to start the race to honor our hard work, our supporters and fans, and retire on the first mark under the Poseidon Temple.  Without indications on the displays for wind, speed, load data mainly, and course data secondarily, we could only sail the course but not race it.  Crews on Grand Prix racing yachts nowadays need instant well-processed data to exploit the full potential of their boats to be competitive and safe.  Complete lack of it may lead to costly gear failures and injuries.  We never had an issue like this in the 29 years that Team OPTIMUM operates racing boats, without any hint that something could be wrong with our electronics package.  We are looking to find out the problem and upgrade our electronics reliability.  We turned back today to be safe and sound to fight another day.

“The retirement from the Aegean 600 is a significant blow to our learning process of racing OPTIMUM S.  We had the boat in the water only since early May and we were learning fast what she likes.  During the 59th Aegean Rally we learned a lot sailing her in the open sea and we were hungry for more in the Aegean 600 under good competition with similar rated yachts from abroad. We are strong but couldn’t risk racing with no readily available data.  Better down than cruising the Aegean on OPTIMUM S.  However, without the Aegean 600 miles under our belts we might have to reconsider our racing schedule plans”, remarks Optimum trimmer/driver Apostolos Serraos.

In addition, we had multiple covid-19 cases among the crew the last two weeks and until the night before, but in true Optimum spirit we managed to overcome by substitutions within the pool of Team Optimum members.  For the record, on board on race day Sunday were: Nikolas Stavropoulos, Giorgios Kouklakis-Papadopoulos, Charis Mavrogeorgis, Apostolos Serraos, Theofanis Dalezios, Giannis Kapos, Lambros Nakis, Mily Tirla, Manolis Markogiannakis, Nikos Apostolakis, Nikos Lazos, Periklis Livas and Vaggelis Karas complete the lineup.

Our patron Samos Steamship is being very supportive and responsive with the forced retirement.  As such, we already took the boat out of the water, pulled the rig down, disassembled the carbon EC6 rigging and shipped it ahead of schedule to Future Fibers in Spain for due service and upgrade.  We are looking forward to sort all issues and keep our Team OPTIMUM members in good form racing on O.S.A. Dehler 30ods. All our thoughts and wishes remain primarily with Team AETHER/Dehler 30od that enjoys a fantastic race so far in the Aegean 600 double handed category raced by the mixed Team OPTIMUM members duo couple Evi Dellidou and Gerasimos Petratos.  Go, go, GO!!!