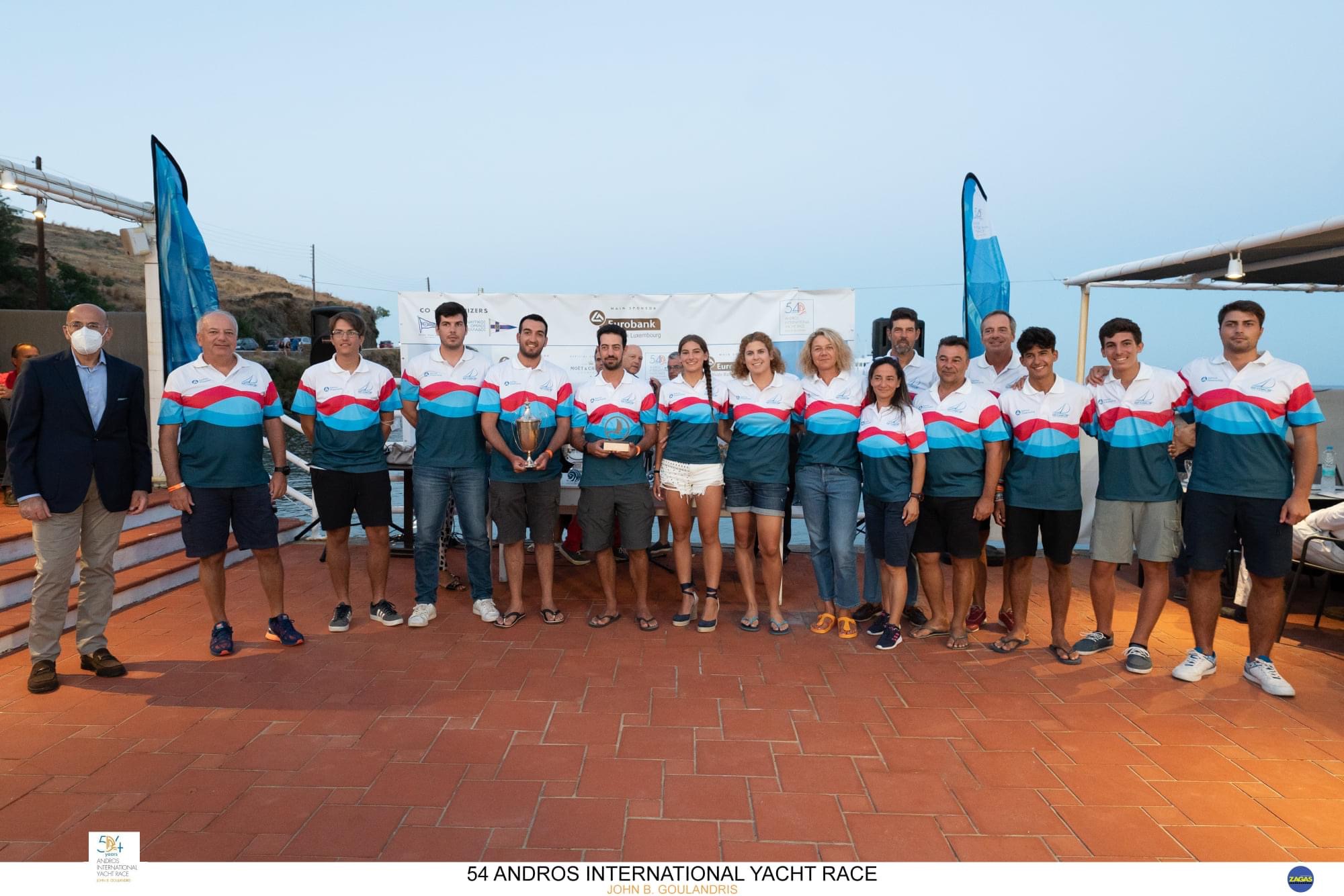 The 54th ANDROS RACE organised by Yacht Club Andros and Yacht Club Greece concluded and met expectations from all involved.  It was the “Toughest Yacht Race” as the light wind conditions that prevailed tested to the limit the patience and persistence of the crews as it was a game of snakes and ladders. Team OPTIMUM-Samos fought hard and scored  a first and a fourth in the two races conducted and took silver home.  The hospitality in Yacht Club Andros reached a new high and all participants enjoyed a fantastic sailing event.  Champagne MOET was one of the event sponsors and that made both evening prize-giving ceremonies delightful.   Needless to say that Team OPTIMUM-Samos Steamship co-principal Nikos Lazos celebrated his 54th birthday in a sea of friends and bubbles,,,

“Reading into the race entry list, we realised it would be a fight-on to defend our winner’s title from the 53rd edition in 2019 as an array of mighty  boat  teams  would be competing. In the fIrst 72 mile race from Vouliagmeni to Chora Andros we enjoyed an intense boat to boat competition with TP52 BULLET for 10 hours ending up with BULLET taking Line Honours for 27 seconds and OPTIMUM 3 scoring a bullet on handicap. For the second 12,7 mile race from Chora, Andros to Disvato that took place in extremely light conditions, we won Line Honours from TP52 BULLET but couldn’t  do much to stop Team VELOS of 470 bronze Rio Olympic medalists Mantis-Kagialis scoring a bullet on handicap with PETE in 2nd and PEGA in 3rd, pushing us down to 4th on the scoreboard. The Team performed very well, they were really smooth operators and we all enjoyed a great racing three-day with tight competition as we all agreed in the debriefing during the long motoring delivery back to our base in Nautical Club Kalamaki”, testifies our 26 year old co-skipper  Charis Mavrogeorgis who led the Team with co skipper Vaggelis Nikolopoulos (30) to a podium finish, yet again!

This hard earned result along with the rest of the 2021 season is testimony to the choices jointly made almost two years ago by Samos Steamship senior management and Team OPTIMUM principals to elevate in key positions young talent from within the team and the continuous influx of youth, male and female, into the crew pool.  As such, the line up for 54th Andros Race read  from bow to stern: Christos Stathas(16), Vassilis Livas(17), Kostis Afentakis, Evi Dellidou, Artemis Nesori, Vaggelis Nikolopoulos(30), Nikos Apostolakis, Stavros Kouklakis-Papadopoulos(20), Alexandros Venetsanos(30), Vassia Liva(16), Anna Agrafioti OLY(30), Giorgos Kouklakis-Papadopoulos(23), Charis Mavrogeorgis(26) Periklis Livas, Nikos Lazos and for race 2 only, George Eliopoulos.

This OPTIMUM site and its articles is the place where the living history of Team OPTIMUM is recorded as it happens, and the 54th Andros Race goes down as the last race of the Team on board OPTIMUM 3 as she has found a new owner to love and race her.  OPTIMUM 3 has served Team OPTIMUM from 2003 to 2021 seasons and provided the platform to grow and expand in many ways and reach the level we enjoy today.  That was a long journey added to OPTIMUMM (Mumm36 1994-2002) and OPTIMUMM (Mumm 30 1997-1998) trips and completes our 28 year OPTIMUM story until today.

Stay tuned for what’s coming next…