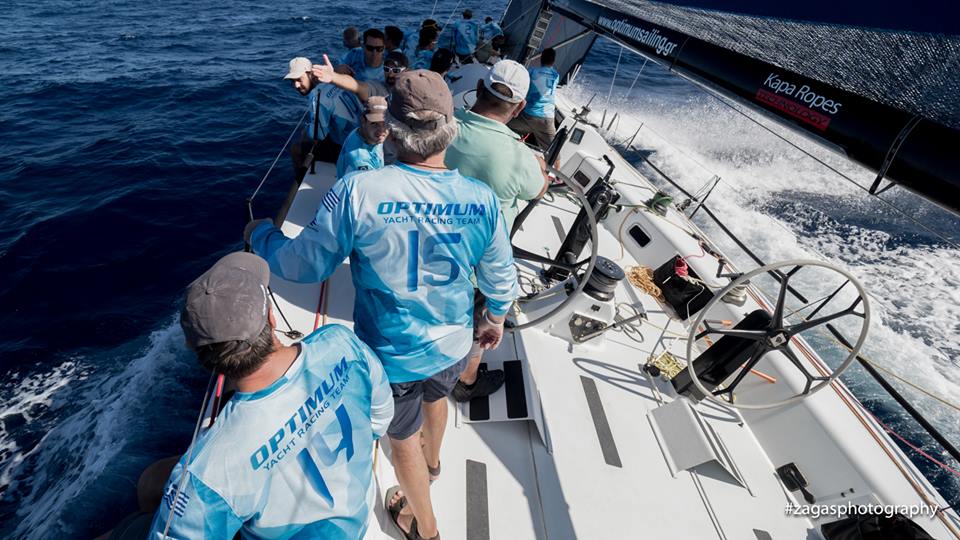 Optimum Yacht Racing Team Competing on board their trustworthy 2000 Farr 52OD OPTIMUM 3 for 7th time in the 50th Anniversary of the ROLEX Middle Sea Race set a new own time record for the 607 nautical mile unique course at d3 h4 m9 s25! By doing so the team from Nautical Club Kalamaki managed the top position in IRC2 class and finished 7th in IRC overall among 133 entries from 30 countries around the world. Additionally, under ORCi handicap scoring, Team OPTIMUM finished 2nd in ORC2 class and 5th in ORC overall.

“This time around we arrived in Malta with a winning mindset for three reasons: 1. We were “hungry” to race OPTIMUM 3 after sitting on her cradle for more than a year. 2. We had a much younger average crew age on board that increased immensely the competitive factor and 3. We had a huge psychological boost from the support our Greek Dream Team had generated from so many institutions and companies from all over Greece. Delivering such a great result made everybody involved or just following the campaign in Greece really happy”, says long time Optimum crew member Nikos Apostolakis.

The race itself proved as hard as one can get with winds from 0 to 50 knots, calm seas to 5-star surfing waves and hard and repeated rain squalls that forced more than 30 yachts to retire due to equipment failures and/or Man Over Board incidents and unfortunately crew injuries. It is generally agreed that the 50th Anniversary was a tough one. Team OPTIMUM apart from a minor fitting breakage, concluded the course unscathed and in high spirits knowing they were always in the top of the leaderboard all along the seven corners of the race course.

“When we left Greece for Malta we knew already that we would face fierce competition in class 2 (14 yachts) from top teams with much modern yachts like 3 TP52s, a Cookson 50, a Club Swan 50, a Carkeek 47 and the super brand new and specialized NMYD54 named TEASING MACHINE among others. We didn’t bother. After all we never had the best weapon competing. Our strength was always our motivation and passion for sailing.  This time was no different but actually stronger than ever because of the unified support we have gathered for our mission.  It all went nice for us and maybe some others were pressed to push over the limit and this might explain some notable breakages and retirements. Finally, I want to congratulate Royal Malta Yacht Club for their superb hospitality and organization that was offered to a record fleet of yachts and crews competing, and always with a smile and supportive attitude. Bravo!” says team OPTIMUM leader Periklis Livas.

OPTIMUM 3 is on its way back to Athens in N.C.Kalamaki with 5 guys from the racing crew including co-skipper Nikos Lazos and a guest lady supporter. Others fly back to Athens, Thessaloniki, Kefalonia and four more will remain in Malta for the prestigious awards ceremony on Saturday to collect their hard won trophies.