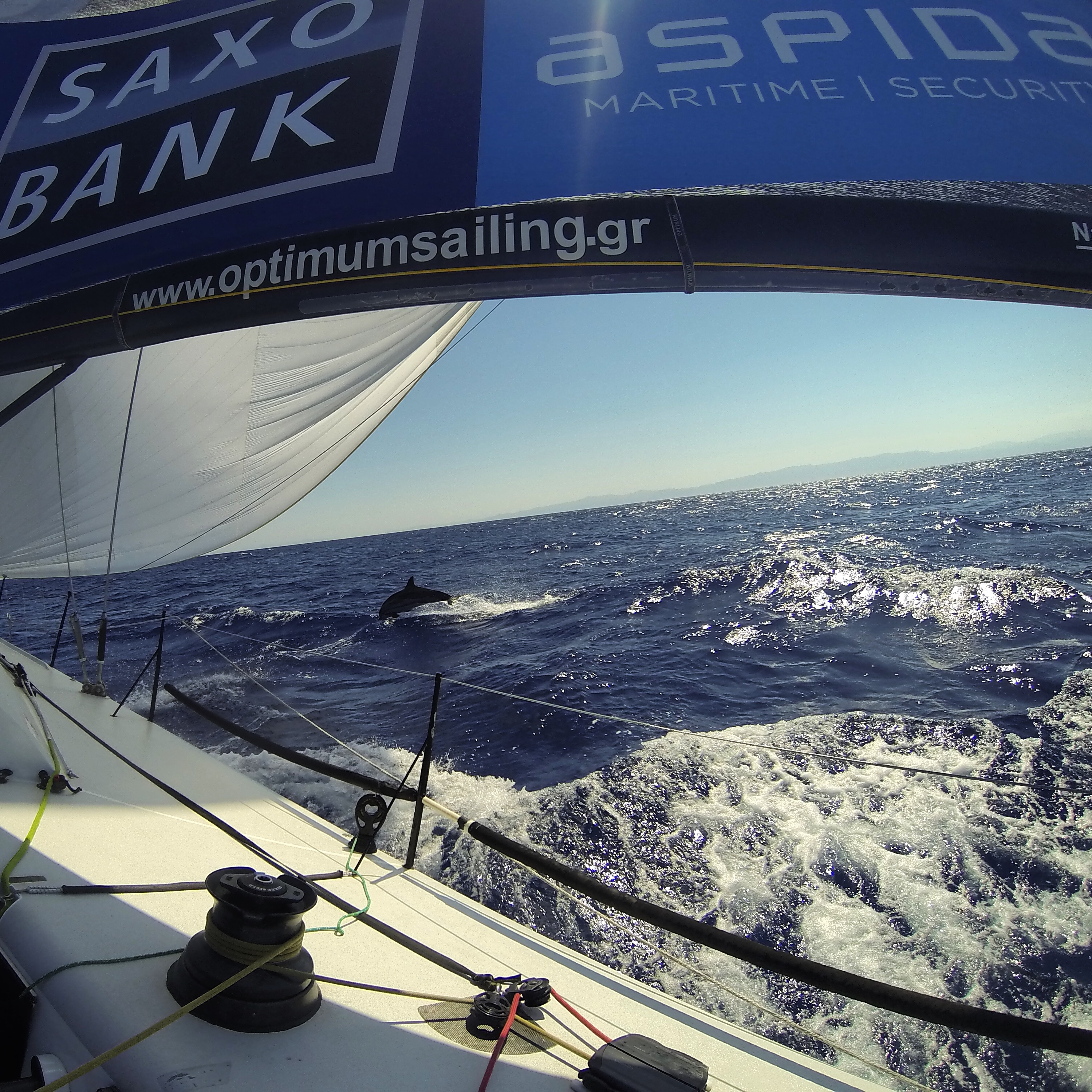 Race 1 and 2 of the 52nd Aegean Rally is history and OPTIMUM 3-ASPIDA-SAXOBANK scored a 5th and a 1st respectively, and holds 2nd overall before racing resumes next weekend with races 3 and 4. The Mayor of Piraeus fired the start From Faliron Bay from a gunboat provided by the Hellenic Navy on Saturday 18th, 11:00. Force 7 winds, gusting up to force 8 from the North provided a spectacular start for spectators, and fueled with adrenalin the competing crews. OPTIMUM Yacht Racing Team was from the beginning with the leading group of boats surfing downwind towards the scoring gate at Stavros rocky island in the SE of Hydra, 46 nautical miles from Faliron. That was the route of race 1, race 2 being race 1 plus 20 miles reaching to Parapola island and 58 miles upwind to Vouliagmeni (total 124 nm) in a pitch black night, fighting waves you could only sense but not see. That’s what the Aegean Rally is all about, finding your balance in extreme conditions along with your teammates and fellow competitors.

“During the early morning briefing, our Skipper presented to the crew the details that the organizing committee passed on Friday’s skippers meeting and prophetically pointed that whatever we would have to deal with unforeseen trouble due to the heavy weather conditions, we should remain focus and fight all the way to the finish in Vouliagmeni. And trouble we got. About an hour from the start, surfing at 22 knots speed with the full size 300sqm spinnaker in 37 knots of wind, a spinnaker sheet block broke apart and led to a series of trouble that cost us in the end the destruction of the spinnaker itself which translated that we had to limp to Stavros scoring gate underpowered with our small storm spinnaker. That cost us dearly, but other boats around sustained more serious damage and crew injuries and had to abandon racing altogether. At Stavros, the conditions have lightened up and we hoisted a lighter cloth full-size spinnaker and we started to recover some lost ground. At Parapola, we turned upwind and we pressed as hard as possible in heavy seas and winds up to 28 knots. All 15 of us left no stone upturned in our effort to maximize performance and catch up, knowing via internet the results of race 1. In Vouliagmeni, we crossed the finish line at 01:11:12 and soon find out that by doing so well we managed to win 1st place in race 2. It was a hard fought victory, driven by our “never give up” mentality”, admits midbow/pitman George Chatzigeorgiou who is also taking care of our personal fitness coaching as a professional fitness trainer.

Speaking with our sponsors ASPIDA Maritime Security and SAXOBANK and debriefing them about our success, we found out that the “never give up” mentality, is core value in their strive for success in their business world too. It was an Optimum Team effort that this weekend was carried out by Gary Gabri, Stratis Tsamparlis, George Hatzigeorgiou, Giannis Kapos, Nikos Apostolakis, Alexis Chrysochoides, Manolis Markogiannakis, Kostas Makridis, George Kyragiannis, Thanos Papasideris, Gerasimos Petratos, Patroklos Tachtatzis, Manos Roudas, Periklis Livas and newcomer 19 year-old Elisavet Mazaraki, Greek sailing champion in Olympic sailing categories and first and only female athlete ever on board OPTIMUM 3!