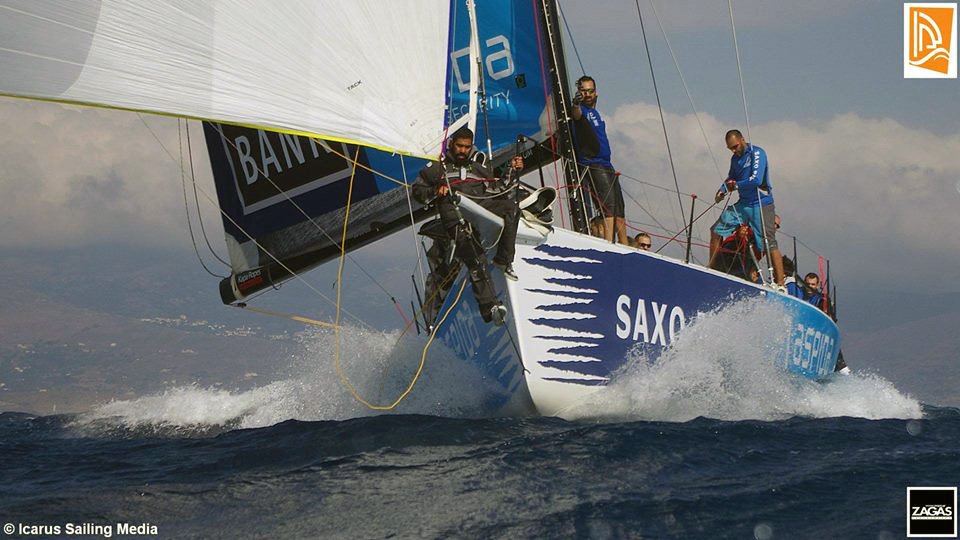 Never Ever Ever Give Up

We are on our way back from a mentally and physically tough long weekend after successfully competing in 47th ANDROS International Race from 6th  to 9th of June.  As one of the oldest and most prestigious offshore yacht races in Greece, the OPTIMUM Team scored 3rd in the ORCi division after a stressful and drama packed 3-day.  This great result was achieved after a very great effort from OPTIMUM 3-ASPIDA-SAXOBANK Team by posting a DNF (Did Not Finish) in race 1 from Vouliagmeni to Andros Island and a 1st from Andros to Disvato Straits.  Add to that a DNS (Did Not Start) in the inshore presentation race on Sunday and you might think that the OPTIMUM team sailed to Andros for the great hospitality that the Nautical Club of Andros reserves for all competing crews.

“We compete in Andros race as it is the only serious offshore race in the Aegean Sea that includes night sailing before the Aegean Rally, the top offshore sailing event in Greece.  The start was from Vouliagmeni on Friday 6th at 16:30, to Andros, a 72-mile course through famous Kavo Doro and the finish line in the port of Chora, Andros.  At the start, OPTIMUM-ASPIDA-SAXOBANK and 3 more yacht teams were over the line early and had to restart properly.  Then, we led as we should due to our size and performance envelope and managed to extend very far ahead from our competitors looking good for a win in the dash to Andros.  But with about 20 more miles to go to the finish the light SW winds died completely and we seriously “parked”.  For 5 hours we covered just 2 miles and at dawn we saw our competitors closing on us with a light breath of wind from NW.  Two of them not only reached us but passed us from a distance less than 100 meters further offshore from the north coast of Andros were we have “parked” most of the night.  Sounds frustrating?  Well, that was the least of our worries as the main cause of stress was time.  Our time limit for concluding the 72 mile course was 19 hours and the way things looked like, it would be impossible to achieve.  But the boys did not give up.  We kept doing our best without sleep, little left food and water and managed to start moving again forward.  The wind picked up from behind, we hoisted our largest spinnaker and sailed to our limits in an effort to cross the finish line before13:30 on Saturday.  We did not.  At 13:34:20,  we crossed the line but we did not get the sound of the horn which meant we were DNF…  After 19 hours+ of racing hard we were denied (properly by the rules) that we finished… Well, this may happen to any team from time to time but it always hurts, let me tell you…

On Sunday we got more drama! We left the dock to race in the presentation race for the locals and tourists in Andros and to try to get a good result to earn us a trophy at the local ceremony that same night so to feel better ourselves after race 1 master disaster.  As soon as we exited the port, it was clear to us that it was not safe to race our carbon 52-footer in a theater like course with rocks and swallows were the wind was blowing steady 30 knots, gusting 40+.   We returned to our dock with low morale after our decision to DNS (Did Not Start) racing for the day, but safety comes first and is not an option in the OPTIMUM Team.

Then Monday arrived, and the wind blew hard yet again.  The rest of the fleet, after various incidents and breakages on Sunday were cautious selecting storm sails or reefing their mainsails.  On OPTIMUM-ASPIDA-SAXOBANK we were on fire.  We knew that these were the conditions we will face in a month’s time during the Aegean Rally and that was the reason we were there, to practice our trade racing offshore in heavy weather.  As such, we started in full mainsail and No4 Jib, reached the turning mark under control, bear away, hoisted the A3 spinnaker and never looked back.  We surfed repeatedly in almost 20 knots of speed all the way to the finish to win race 2 and due to inconsistent performances by the other competitors, we ended up in the 3rd podium position overall in Andros International Race, WoW!”  declares mainsail trimmer Lambros Nakis with a sign of relief in his voice.

The title of Most Valuable Crew (MVC) for the long weekend of racing goes to always available bowman Alexandros Sofroniadis for spending lots of time at the top of our 26-meter mast kicking the battens to tack and looking for wind in race 1 and at the end of our 2-meter long bowsprit in race 2 today, sorting out spinnaker tack issues and getting more wet than any other of us, possessing a positive attitude all the way through.