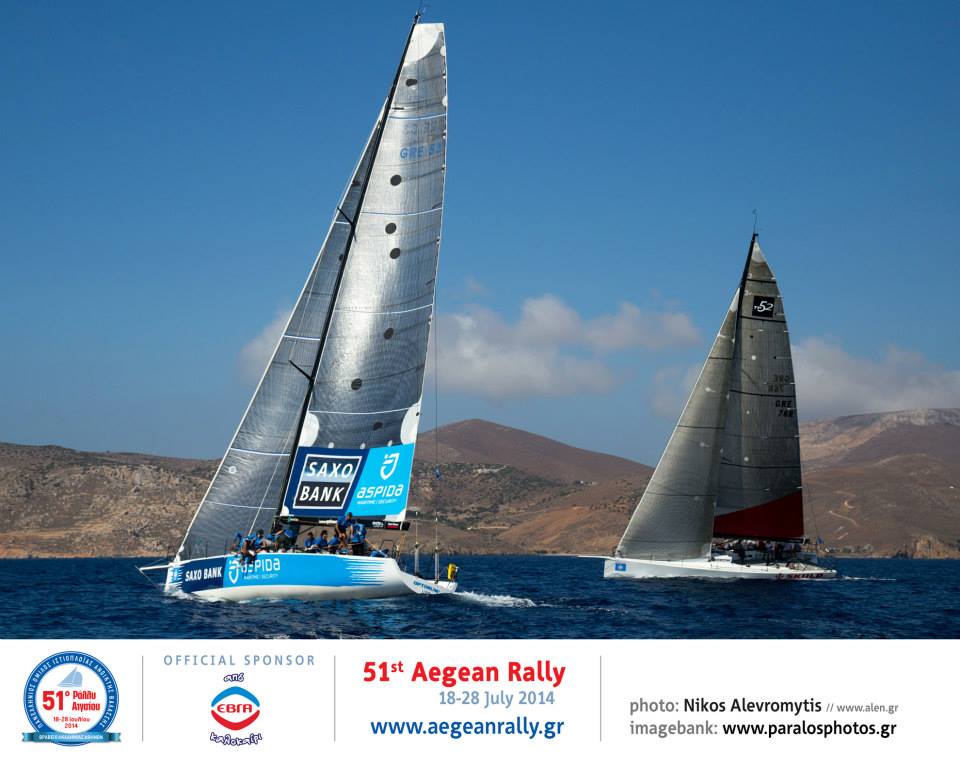 Line honors and another leg victory

The 51st Aegean Rally concluded with the competing yachts crossing the finishing line in Cape Sounio where the ancient temple of Poseidon resides.  OPTIMUM 3-ASPIDA-SAXOBANK   was the first boat to cross the line and by doing so the crew knew that they scored another leg victory, ending the 10-day sailing marathon on a high note.  As such, with a score of 2,1,7,7,1 in the 5 races, the Optimum Team climbs to 2nd place overall in its 20th participation in the Aegean Rally.   This great result is a formidable addition to the OPTIMUM Yacht Racing Team records and translates to 16 podium finishes out of 20 tries, 6 of which are firsts.  This long and steady record is easily recognizable by sponsors and we are happy we kept it straight this year too for ASPIDA Maritime Security for 3rd consecutive year and newcomer onboard SAXO BANK.

“Leg 5 from Ios to Sounio was full of thrills and spills.  It was an upwind slog in force 6 winds and waves at full throttle.  More importantly, it was nail biting for the guys on board as it was the first time we would sail boat to boat with the newcomer in the Greek fleet “Bullet” upwind in the open sea in such conditions for many hours.  We found that OPTIMUM 3 could hold on its time to the much newer “Bullet” upwind in full main and Jib in the 3-4 range, knowing very well how capable the Bullet crew is .  In the end, we had an opportunity and made the right tactical call this time and were able to overpass them and take line honors as the leg victory too.  That way the line honors score went 4-1 to “Bullet” and the leg wins score 3-2 to OPTIMUM 3.  We felt that the tough boat to boat competition we faced this year in the Rally made both teams learn more and raise their game.  For OPTIMUM 3 it served as a great test prior to our international effort to score another great result in the Rolex Middle Sea Race in October in Malta. We are excited that we have such high competition level in our home country”, points mainsail trimmer Lambros Nakis enthused by the Optimum’s Team longstanding performance.

The prize giving ceremony is on Monday, July 28th at 21:00 and the OPTIMUM Team, sponsors ASPIDA and SAXOBANK, supporters Quantum Sails, Kapa Ropes Technology and Nanophos Marine Pioneering Technology as well as Team’s families and fans will be there to celebrate the end of another long tough Aegean Rally.