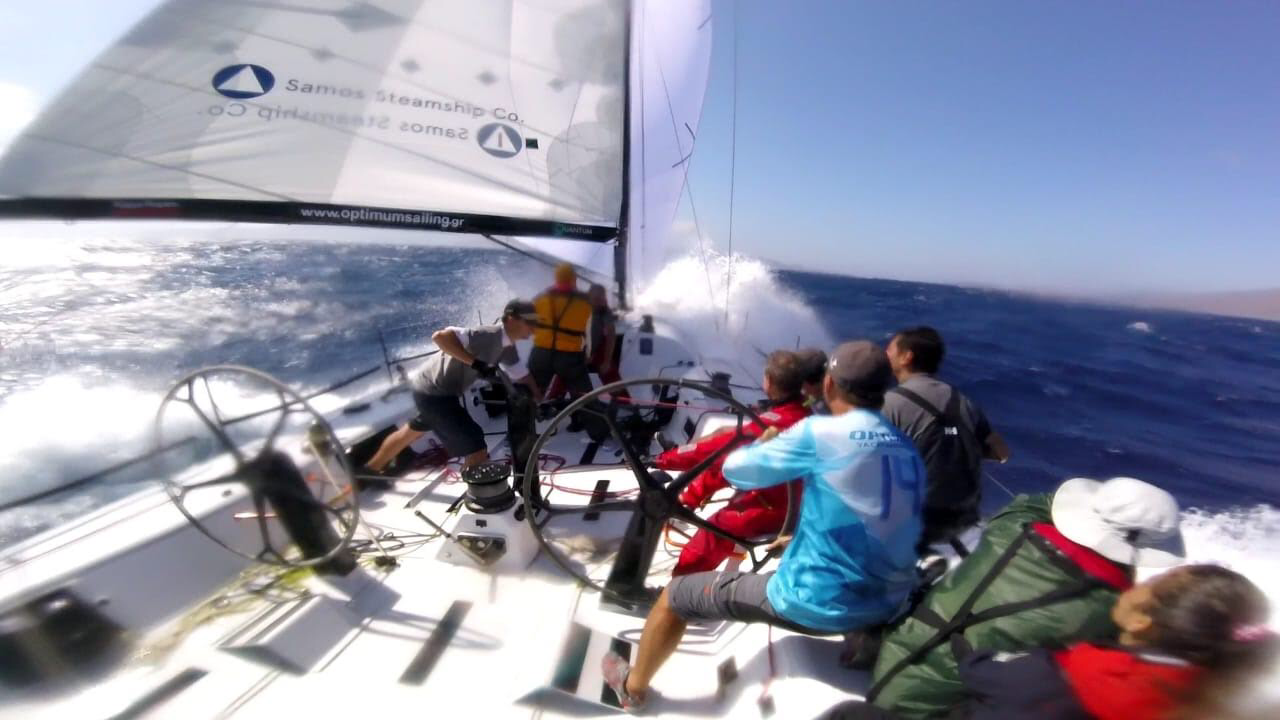 After the decision of the Racing Committee to cancel Saturday’s coastal race due to force 8 winds blowing on the racecourse, it all came down to Sunday’s final sprint race from Chora Andros to Disvato, the strait between Andros and Tinos islands to decide the winner of the 52nd edition of Andros Race.  With force 7 winds gusting 8, Team OPTIMUM-SAMOS Steamship Co. hit the pedal to the metal and got to the finish line in Disvato first and posted a second on the handicap results.  By scoring 1,2 on the scoreboard, Team OPTIMUM-SAMOS Steamship Co. got clearly the top podium position, with VELOS-Eurobank of Olympic Medalists Mantis-Kagialis in second and PEGA-Goulandris  Shipping Bros in third.

“It was a full adrenalin ride! We burst upwind and reached first the turning mark, negotiating patiently with 35 knot wind gusts coming over the rocky coast of Andros.  With two tacks, we passed the mark and turned downwind, hoisted the spinnaker and we started surfing mountainous waves propelled from winds reading 38 knots true on our  instruments.   Our boat speed  was steady in the high tens and we had sustained surfing bursts of 22+ knots.  The bow was slicing the waves sending huge masses of water over the deck again and again.  We broached once but managed to recover without lowering the spinnaker.  The plan was to perform one jibe and in to the finish line for tactical and safety reasons.  You could sense the tense on the whole crew as navigator Manos Roudas started calling the time and distance for the jibe… We executed  a perfect jibe on a long wave surf and looked well positioned for the finish line on the starboard jibe.  Now, we were about a mile from the finish, in the narrowest part of the strait between Andros – Tinos with the wind funnelling through hard.  Manos called a huge gust coming over the cliffs of Andros.. 4, 3, 2, 1.. helmsmen and trimmers prepared but it was over the edge and we had a major wipe-out, lowered the spinnaker to recover and seconds later we crossed the finish line with the mainsail only.  Then we looked back at our pursuers…, we could only see a few boats with jibs, not a single spinnaker.  We felt the bravest of this sailing race day..”  says  22-year old new recruit on Team OPTIMUM, Christos Mylonas.

But winning the prestigious Andros Race or anything in life has to do with dedicated people trying above their best, and the partnership of OPTIMUM Yacht Racing Team and SAMOS Steamship Co. performed beyond expectation. The ten OPTIMUM Team members Livas, Apostolakis, Roudas, Petratos, Gabrielan, Nikolopoulos, Dalezios, Dellidou, Mylonas and Livas Jr. blended nicely with the five strong SAMOS Steamship Co. associates Nikolakis, Golovanov, Katechos, Karamitros, and Varvaressou and managed a popular clean win amongst tough competition.  We drink and cheer for OPTIMUM-SAMOS Steamship Co. successful partnership!  See you all at the main prize-giving ceremony tonight at Yacht Club Greece, be there!