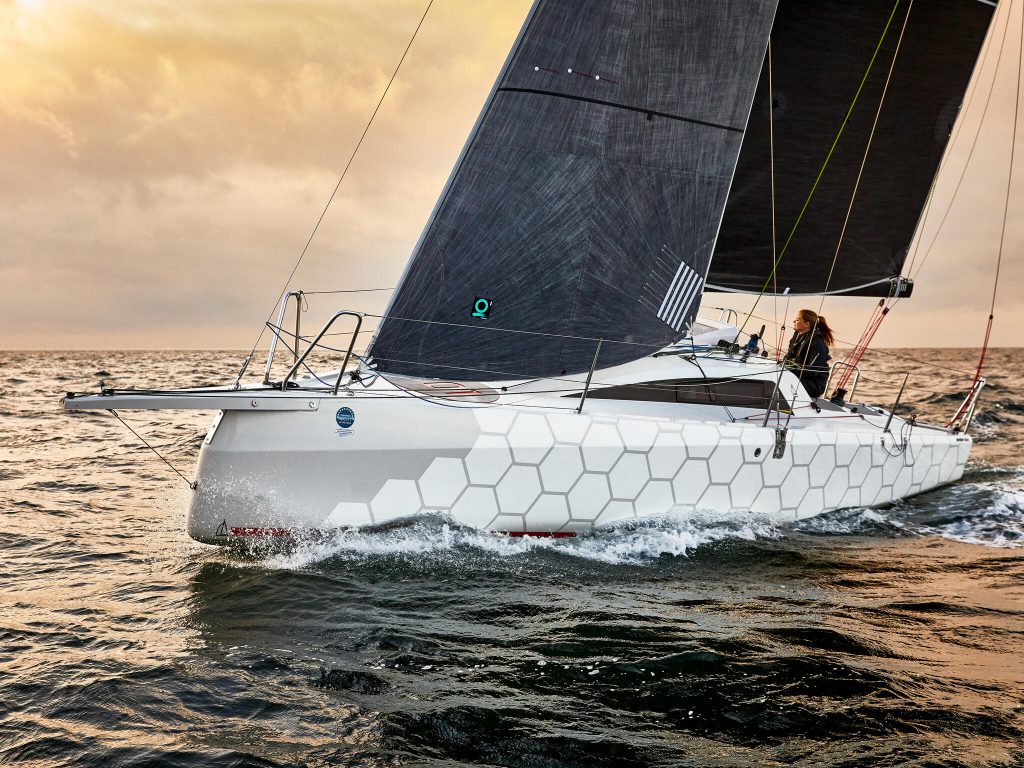 Nineteen(19!) seasons with our trustworthy Farr52 One Design OPTIMUM 3 come to an end on a high note. The 2021 season was hugely successful as the Team posted a 2nd overall in IRC and 1st in the ORC category in the inaugural AEGEAN 600, a dominating 1st place in the 58th Aegean Rally with a 5-0 score and a 2nd in the 54th Andros Race. Her enthusiastic new Swiss owner Mr. Francois Bopp renamed her CHOCOLATE 3, assembled a formidable international/Bulgarian crew and he is bound for the 2021 ROLEX Middle Sea Race. We wish him to fulfil his dreams, enjoy the ride and live on worthwhile experiences.

“When we first led our eyes on her in September 2002, she was being campaigned as CHESSIE RACING in United States since her built by Carroll Marine in 2000. CHESSIE RACING team owner George Collins was the last privateer to enter the Whitbread/Volvo Round the World Race in the 1997-98 edition in the VOLVO 60 class. Upon completion of his Whitbread/Volvo dream he commissioned the Farr office to design a smaller Volvo 60 aimed to fill his Annapolis based sailing program. So the Farr 52 One Design was born which was the culmination of the other successful Farr One Designs, the Mumm 36, Corel 45, Farr 40 and Mumm 30. In 2002 Hydra Race in October we shared with our Mumm 36 crew our ambition to buy CHESSIE RACING, revamp the big boat scene in Greece and campaign her abroad in long distance 600-mile races. I remember the initial silence that fell in the Alkyonides apartment that we usually stay when we race in Hydra, the enthusiasm that followed and the seriousness of the situation as there was no other so big and so high performing modern carbon racer in Greece and Europe apart from a few sister ships in U.K”, remembers Team OPTIMUM co-principal Nikos Lazos.

“We knew it was a big step up, and we were missing critical knowledge in big boat racing but we were young and enthusiastic and as soon as we signed a two year sponsoring contract with WASH & GO, supporting us already for 5 years at the time, we never looked back. OPTIMUM 3 arrived in February 2003 by ship in Piraeus and we lost no time. We asked all our Mumm 36 crew to bring along a like-minded friend, expanded the team and assembled the boat under the guidance of Brian, the boat captain who came along as part of the buy-deal. We did a few training sessions with him to learn the systems and the crew choreography on board and he left. Hydra Race on March 2003 was our first race and by the Aegean Rally in July, although we finished 11th, we felt that we had a good grasp of how things work with big boats and it was a matter of time to mature and get back to the podium. Moreover, we were so enthusiastic and comfortable with the handling that we decided to participate in the 2003 Rolex Middle Sea Race which we finished 12th and gained invaluable experience. In 2004 we won the Aegean Rally and the ROLEX Middle Sea Race overall and set the stage for a fantastic journey of successful international racing on OPTIMUM 3, including 19 Aegean Rallies, 7 ROLEX Middle Sea Races, 2008 ORC World Championship, 2016 ORC European Championship, an AEGEAN 600 and numerous other local races. Equal important was the fact that other owners decided to join with carbon 52-racers, so a Farr 520 and two TP52s found their way in Greece” shares Team OPTIMUM co-principal Periklis Livas.

The first pages of a new chapter in Team OPTIMUM storybook has been written already as team members, friends and supporters have invested in no less than three brand new Dehler 30 One Designs boat, AETHER, OPTIMUM 4 and LAVORO AGAIN. AETHER arrived in mid 2020 and has already been very successfully campaigned double handed by Team OPTIMUM members Evi Dellidou and Gerasimos(Jerry) Petratos with top result so far a 2nd place in the AEGEAN 600 double handed category. OPTIMUM 4 and LAVORO AGAIN just arrived and will be commissioned in 2022.

All three will be fully campaigned and plans include to form an OPTIMUM Offshore Racing Academy under the auspices of Nautical Club Kalamaki to share and show how much serious fun and absorbing can offshore sailing and racing become in someone’s life. These little pocket rocket boats are serious offshore capable all the way to ocean crossings solo, double handed or fully crewed up to six members. The last 20 years there has been a huge evolution and development in design, boat building, sail plans, gear and equipment and on the Dehler 30od one can identify all of it except foil technology. Dehler Yachts of Hanse Group and the Dehler 30od class association supports already our effort and crew teams from abroad are expected to join for three boat training camps. Special care has been taken in cooperation with QUANTUM Sails Greece and the three boats carry identical top-end sail inventories to allow fast evolution in crew work techniques, sail combinations in various conditions, rig tuning, electronics and autopilot calibration, water ballast use, crew weight positioning, etc.
Furthermore, our patron/sponsor Samos Steamship is keen to play a key role in the after OPTIMUM 3 era and an OPTIMUM 5 project with international ambitions is being examined. It is early days but the 30-year Team OPTIMUM anniversary is not far away and we need a good reason for fireworks…