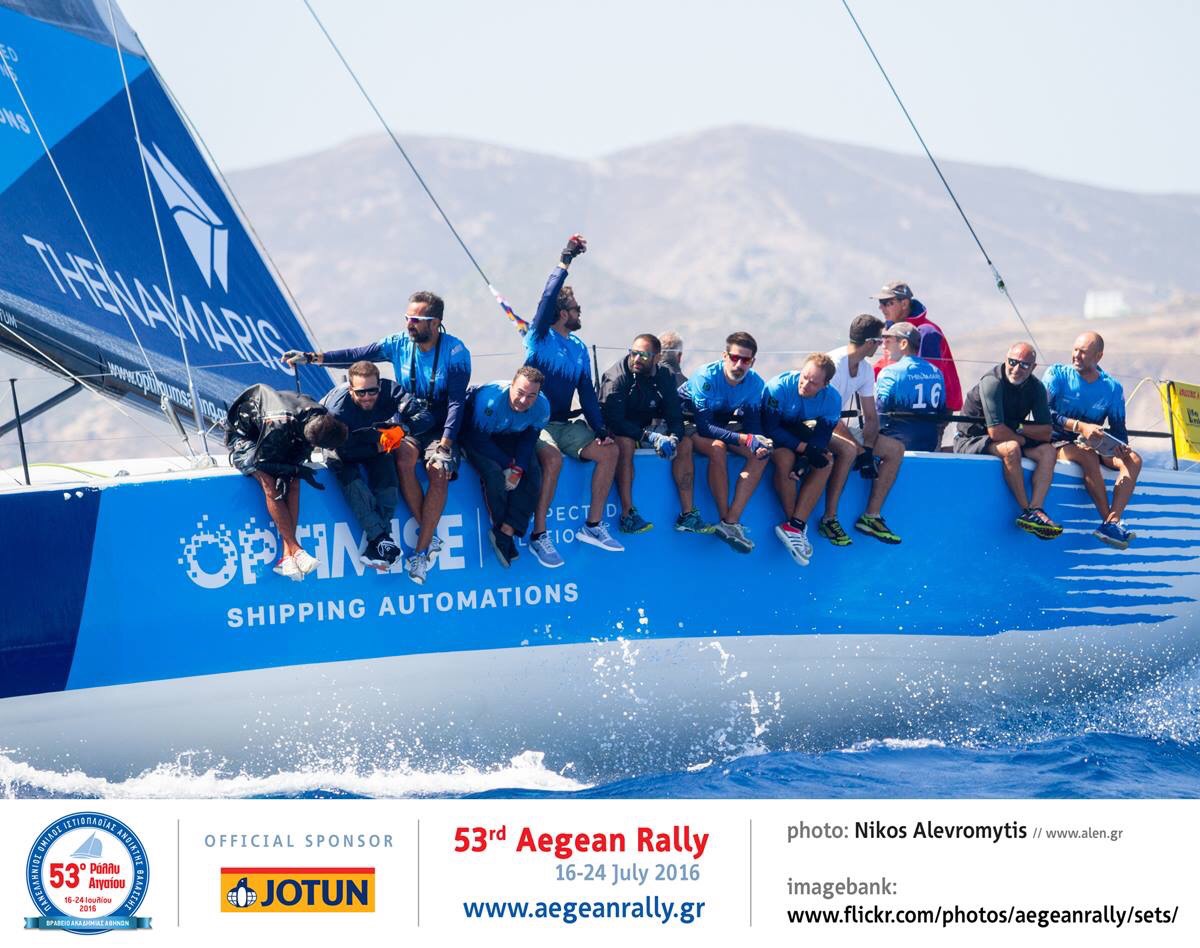 Race 3 of the 53rd Aegean Rally was completed today in force 6-7 northerly winds that tested crews and gear. The 24-mile coastal race around Patmos island and Anydro Rock anti clockwise was a testing 3-hour affair for OPTIMUM 3-THENAMARIS-OPTIMISE. Once back in port the results showed that we won Race 3 and by doing so we elevated in 2nd place overall with 3 races out of six completed.
“I know Periklis the skipper of Team Optimum and I always wanted to experience a day racing on board. I am from Patmos and when he told me he needs crew for today’s race I got really excited, went to bed early and showed up at the boat at 09:30. A classic Aegean Blow of “meltemi” was on the menu of the day topping at 30 knots. The Optimum guys made all four local newcomers feel like home and before we know we were blasting around with the 100+ sqm mainsail waiting for the starting signal. We added the No4 jib and we hit the starting line reaching towards the eastern cape of Patmos at 12+ knots. I was positioned as a mainsail grinder and boy I worked on the pedestal really hard to provide power to surf continuously. Then the menu had hiking on he windward rail all the way to Anydro Rock where we bear away and hoisted the A5 fractional spinnaker. More grinding here that translated to adrenaline surfing speeds of over 18 knots. I was happy to see the southern most cape of Patmos approaching fast, spinnaker going down, jib up and hiking breathless for the last 4 windward miles towards the finish line in Skala, Patmos just in front of my house. Wow, what an experience, thank you guys for inviting me over”, says Elias Kamaratos a local friend and fan of Team Optimum.
As you might have guessed we are in need of some crew hands in this Aegean Rally as most of the regular crew was with us in Chalkidiki 10 days ago for the European Championship and could not leave work for 10 more days within July. So hands up for the 11 heroes Gary Gabri, Stratis Tsabarlis, George Eliopoulos, Nikos Apostolakis, Thanos Papasideris, Kostas Makridis, George Kyragiannis, Tasos Dikastopoulos, Manos Roudas, Charis MAVROGEORGIS and Periklis Livas that have committed for the full Aegean schedule. Also, we pay huge respect for Gerry Petratos, George Chatzigeorgiou, Nick Lazos, Lambros Nakis, Michalis Kouvaris and Manolis Markogiannakis for partly joining for specific races. Last but not least, the three caballeros from Patmos Elias Kamaratos, Andreas Papadopoulos and Konstantinos Konstantinidis that greatly assisted in today’s win. Without them we might have not left the dock today. Thank you so much!