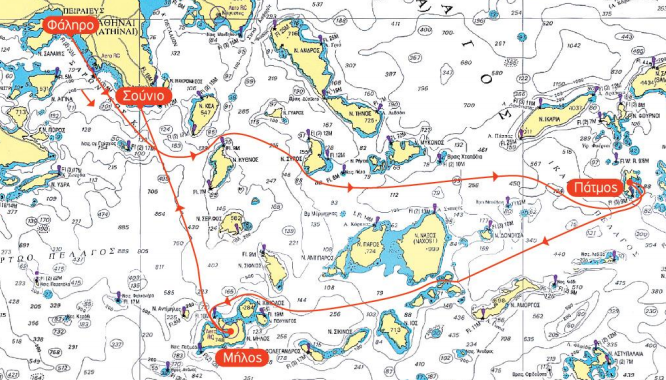 We are delighted to compete once more in the 53rd edition of the legendary Aegean Rally. Actually, it is the 22nd time that OPTIMUM Yacht Racing Team participates in the top Greek Offshore Sailing event. The Aegean Rally is unique worldwide in the sense that every year follows a different route around the Greek Islands and includes 2-3 island stopovers. This year is no different and the route is from Athens to Patmos via a scoring gate in Syros, a coastal race in Patmos, then Patmos to Milos via a scoring gate in Koufonisia and a closing leg from Milos to famous Cape Sounio. That’s 400 hardcore offshore sailing miles in the Aegean Sea blue colors that call us back year after year. The OPTIMUM 3-THENAMARIS-OPTIMISE was 3rd in the Syros scoring gate and 3rd again in the finish in Patmos and as such lying 3rd after 2 races out of six.

“Mr. Kapralos head of the Greek Olympic Committee fired the start from Greek Navy ship “Pezopoulos” that will accompany the fleet around the Aegean and serve as Committee boat at 11:00 on Saturday. Light Southerly winds prevailed that allowed us to enjoy the Aegean beauty all day and night long. During the night, the moon and the myriad stars offered great backlight to our long 160-mile route. Racing wise we pushed hard nonstop for the 22 hours that took us to cross first the finish line in Patmos. Although, we managed to open a gap of 6 hours to the following boats, on handicap we ended up in third place, a result that will try to improve in the 4 remaining races” says trimmer and wind spotter Thanos Papasideris.

OPTIMUM 3- THENAMARIS – OPTIMISE crew will be preparing for the 34-mile coastal race this evening and any friends and team followers in Patmos are welcome to pay a visit.